A synthetic peptide composed of alternating L- and D-amino acid residues has been recently shown to inhibit aggregation and reduce toxic effects in neuroblastoma cells, of the beta-amyloid peptide, Aβ, implicated in Alzheimer’s disease. In contrast, a “twin” peptide with the same sequence, but with all L-amino acid residues, had no inhibitory effect on amyloidogenesis or toxicity of Aβ. 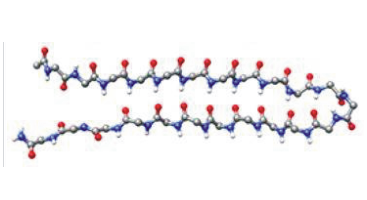